My mom knows that I write historically set erotica.  She doesn’t know under what name, but it wouldn’t matter if she did. She’s okay with it.

In fact, when the topic came up, the first question she asked was, “Do you think you know enough history to do that?”

Seriously. Let’s think about that statement.  My mom—who goes to church at least once a week, who prays and reads scripture every day, who devotedly follows commandments and instructions from religious leaders, who follows a dietary code and wears special clothes because that is what she’s told to do,  who donates 10% of her income as tithing plus more for fast offerings, who has only been intimate with one man—she skipped right over the part where I told her that I write pornography online for a living.

All she wanted to know is if I got the historical details right.

That fact still boggles my mind.

Then again, my mom and I have gone through a lot together.

Also, we nearly lost her to cancer. Twice. The story is as follows.

During the ’90s, my mother took Premarin in excessive amounts, like a lot of women.

Turns out, she only needed to take a fraction of that amount, and that such a high dosage combined with a family history of the disease (her older sister had it too) pretty much destined her to develop uterine cancer.

I get very angry when I ponder this too much. How my mother could have died because some doctors (probably male) decided that a shotgun approach was better than a laser.

Then, there was the next fuck-up. Once her doctors performed a hysterectomy and ordered a couple rounds of chemotherapy, they monitored her abdominal cavity for any signs that the cancer was spreading there.

Turns out, it was spreading, just not upwards.

Vaginal retrograde. They should have been keeping an eye out for it, but they weren’t.

What my mom had to endure to beat the vaginal cancer was hell. This time around, they used radiation as well as chemo.  I will not get too graphic but the radiation treatment involved a cone. Imagine the worst sunburn you’ve ever endured, in the most sensitive part of your body.  And not just once, but multiple times.

She lost over 50 pounds because she was on a “low-residue” diet which meant protein shakes exclusively.  She would sob uncontrollably when she used the bathroom.

At one point, she told me they might need to perform a vaginectomy.

I remember asking, “But how do they remove a hole? Do they… fill it up? stitch it up?”

Turns out, they were considering removing all the fleshy linings of the vagina. Which means she would never be able to use it again for sexual purposes.

That’s when my mom crossed the line, bless her heart, and said, “Of course, this means that your father and I are experimenting with alternative ways to express affection.”

She then looked around for eavesdroppers and stepped closer to me.

“Which means, I need your help buying one of those things you use. So I can stay ‘open for business’ as it were.”

One of those things?   A cell phone? An egg timer? An extension cord? Various types of fabrics and glues and glitter for craft projects? A hair dryer?

Don’t even get me started on the “open for business” part.

Here’s the weird part. I hadn’t previously discussed with my mom any hypothetical sex toys that I might or might not own.

I think her mental reasoning went like this: “She is progressive, even radical, about her attitudes towards women having the right to enjoy sex and to use birth control, so she must have a sex toy. Or least know how to get a sex toy.”

Do not, under any circumstance, advise your church-going mother to purchase a thorougly lifelike big black cock.  My advice to all.

Looping back to the conversation that started off this post. Once my mom was informed of my wanton writing ways, she wasn’t surprised.

“You always did obsess over bodice-rippers with sex scenes,” she mused.

“I think ‘obsessed’ is a strong word. More like ‘acutely curious’,” I responded. “I was obsessed with all things Narnia and Greek mythology, if you remember.”

I sighed in response. “It is what it is. I don’t think either of us could guess this is where we would be.  Best just to not worry about it probably.”

Pause in conversation. I fiddled with the radio. My mom finally worked up the courage to say what she wanted to say: “Maybe you should tell me your pen-name. Because sometimes I need to read a sex scene to get me in the mood with your dad.”

I choked on some spit. Shook my head. Moisture came to my eyes.

“No, Mom, not a chance in hell. But I can find you some other authors whom you might like. You know, ones that aren’t all about…”

“All about the big black cock. See, I remembered. Okay, thank you.”

So that is what I do now, I read stories by my fellow erotica authors, and pass along the names of those I think my mom would like.

All I have to say is that life is fucking weird.

Also, when your mom survives two rounds of cancer and is still around to embarrass the devil out of you, then you need to make sure you honor her with flowers on her Cancer Free day. That day when she found out it was all finally gone.  I remember it well.

Peach is the color for uterine cancer, but orange roses are easier to find.  There is no set color for vaginal cancer (probably because no wants to say “vaginal cancer” out loud in public) so I include purple which is the general color for cancer.

So now you know. If someone asks me if my mom knows I write smut, then I can say, “Yes… yes, she does. So go to hell. But have a nice day.” 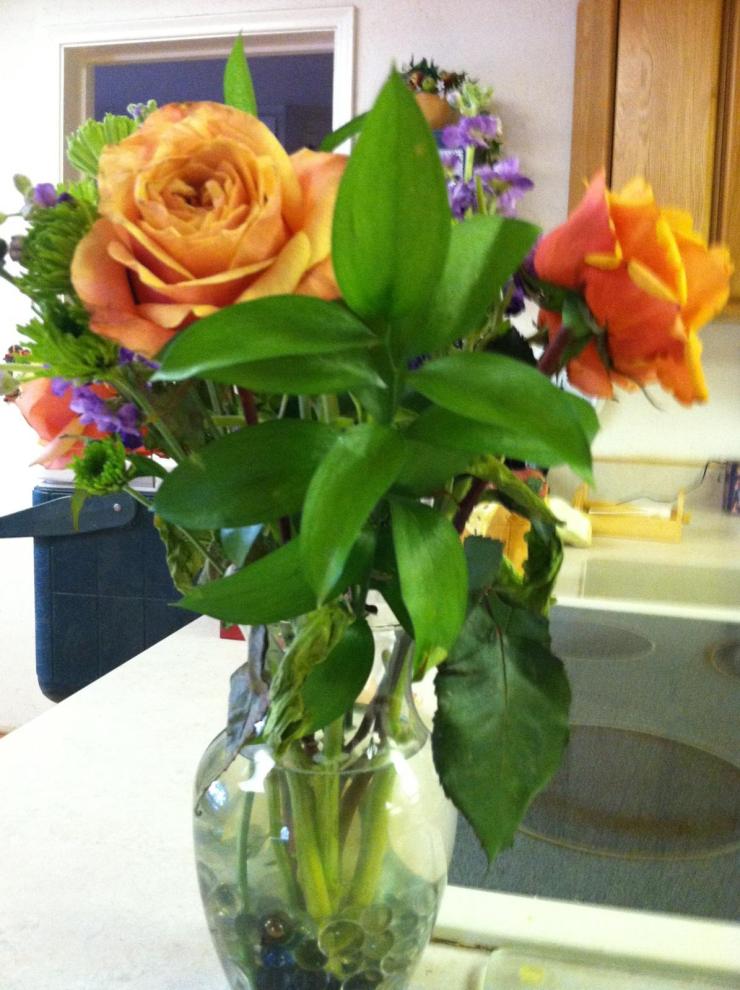