There’s a song that was really cool back when I was in high school.

Actually, it’s still cool. It has aged well, like its singer: Neil Finn.

There’s some lyrics in the song that are relevant to the title of this post.

Now I’m towing my car; there’s a hole in the roof.
My possessions are causing me suspicion but there’s no proof.

My car is fine. She needs to have her tires rotated, but hey… who doesn’t these days?

And, yes, my car is female.  Her name is Ruby.  I used to have a minivan that I drove into the ground, and her name was Eileen. I chose this name so I could thump on her dashboard and sing an encouraging song to her, to get her up that hill.

I really love this cover. Something about Kevin Rowland in just coveralls in the original video makes me all squick.

So, to aptly return to my point. Damn it, what now? Or, to put it another way… 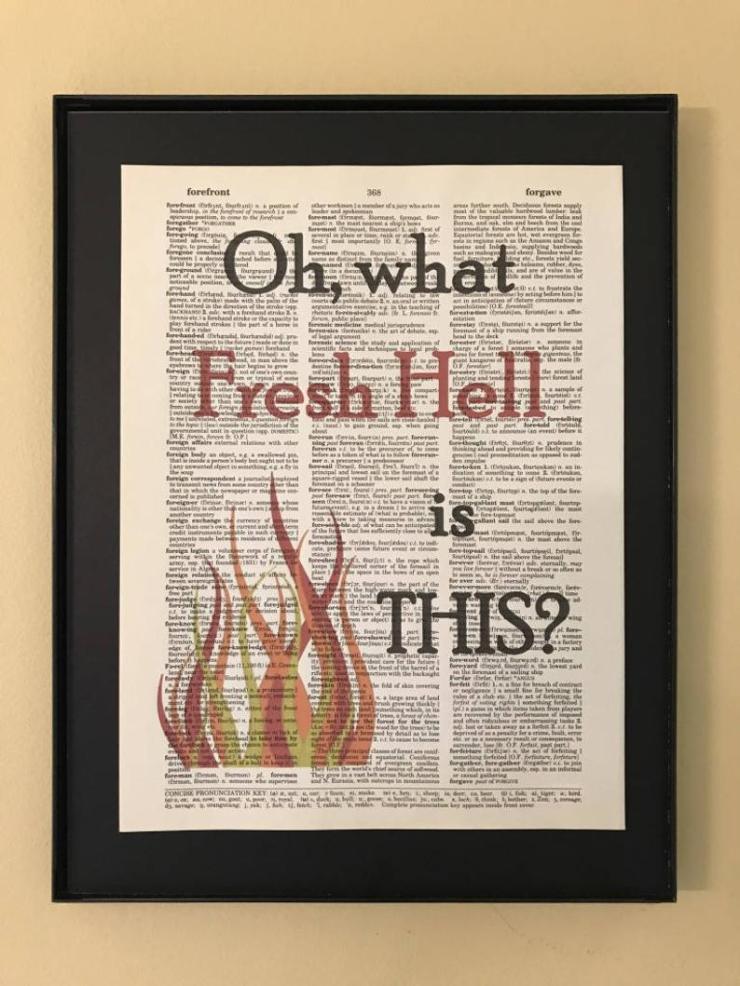 It took a little bit of effort to find an image of this quote that doesn’t involve Sheldon Cooper from The Big Bang Theory.

But, damn it, he didn’t invent it.  I used to think it was Shakespeare, TBH. But it was written by Dorothy Parker, a personal favorite of mine (so bleak! so lonely! brava!).

Not only did she write the poem Angelina Jolie famously quotes in Girl, Interrupted…

But she was brave enough to try her hand at painting. This is her self-portrait.

So, anyway.  The possessions that are causing suspicions are my daughter’s laptop and phone, both deciding to die on the same day in some sort of bizzare techno suicide pact.

I don’t have to tell you, my fellow parents in the trenches of teenaged years, that this was basically the apocalypse for my 16-year-old daughter.

The movie is Dogma by Kevin Smith.  My favorite of his films.

Good news, I was smart enough to get full replacement insurance on our phones.

Bad news, my ex-husband only chose the minimal warranty level on her laptop, so I had to pay $45 to send it in for repairs, with the necessary laptop packaging to not void the laptop warranty.  And that’s money I won’t be seeing again. Laptop. I mean, damn it.

$45 doesn’t seem like a lot, but it’s the difference between me being able to submit a poem to an online contest that ends on September 30 or… say… buy kitty litter. Or the only kind of cereal my daughter will eat right now. Or deodorant. Or (heaven forbid) maybe even a bottle of vodka now and again.

But twinkle twinkle little star… I have a lead on a job. Cross those fingers, toes, eyelashes.

Anywho, I think I am going to forgo that bottle of vodka and submit garden.

Some of the poems that will accompany that one in my next volume of poems, which I will release sometime in early October, are about ideals of male beauty.

on the tight twisting turns of Lombardy
in a roadster from nineteen fifty-nine,
I would oh-so sweetly ask for your hand
if you promised never to ask for mine.

near the verdant vineyards of Tuscany
where this year’s vintage hangs thick on the vine,
I’d beg you to join me in the cellar
where he could sample each other, the wine.

in the maze of metro madness that’s Rome
I would speak of your beauty, how divine!
and then turn around and cast in three cents,
since there is always good luck in the trine.